Now I have been planning a blue sky approach to my army list building, i.e lets build a list around what we want to have, then start to purchase models to make it work.

However I am not quite there yet! So with that in mind, time to write a 2k list that uses some of the elements I want to bring in, and is filled out by the stuff that I actually have!

This has a chunk of firepower, and should be able to stay very mobile for claiming objectives and reacting to opponent moves.

It played relatively well in its first game against Deathwatch last week, and this time is getting its second run out (with no changes) to see how it performs again.

Once I have had a couple of games with it I will look to what I think needs changing - although I already know I'd really love to have Chief Librarian Tigurius in here, and he is easy enough to do by dropping a couple of Intercessors for the points.

The Apothecary & Ancient didn't live up to their points in the last game either, but we shall see how they perform in round 2!
2000 40k 8th Edition Army List Ultramarines 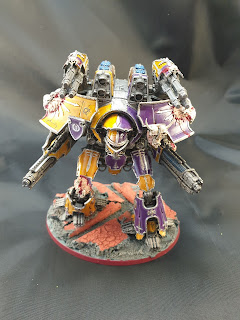 This shoulder of skulls came out better than I expected, althoguh initially I wasnt going for the skulls were grown out of the shoulder, they are of course hugely oversize as the initimdation factor doesnt work if the enemy needs to be at point blank range to realise what they are seeing.


This shoulders skulls actually worked even better than I expected, as did the ones on the gun, less is more, and it works pretty nicely here!

A couple of close up shots, I wonder which god this Titan is leaning towards...

A few more subtle transfers and skulls on the legs, all while he strides over some ruined trench works 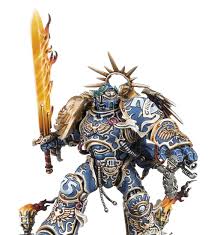 So with my  attendance to the Grand Tournament in May looking more likely its time to begin considering how I do better there, than I did here.